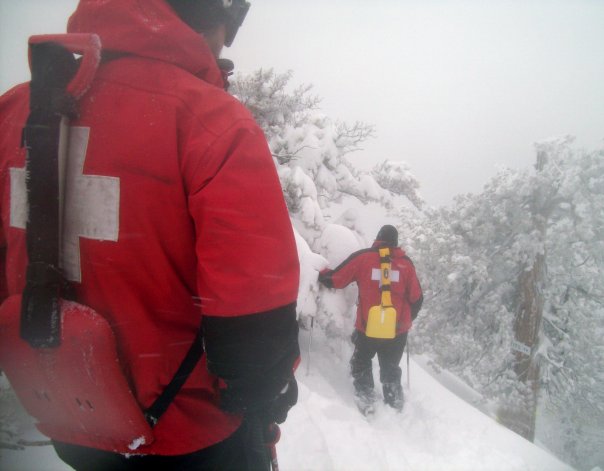 Fat snowflakes swirl and fall around me in clusters. I feel like I’m moving through the center of a shaken snow globe. The effect is dizzying as I ski in the direction of my first wreck of the day (slang for an accident) towing an orange rescue toboggan behind me. In it are a backboard, oxygen, and not much else.

I locate the injured 21-year-old; he is sitting upright. His friend approaches me as I secure the sled across the fall line. “He hit hard,” the friend says. I nod, look around, and kneel beside the boy on the snow. “I’m Cathleen with ski patrol; may I help you?” I say, taking note of his measured breathing and that he’s holding his left side below the ribs with his right hand.

“I’m okay,” he labors; “really, I’m alright.” The boy is lucid but failing, and the friend pleads with him.

“I’m not going down in a sled,” the boy argues as his skin pales. Minutes fly past us and the snow continues to fall.

“I’m not a doctor, but I suspect you’ve got an internal injury,” I try. “Worst case, you could die; best case, you chill and ride tomorrow.” The boy is clear: he doesn’t want my help and I have no reason to force him.

“This is his new normal and anything off from here is bad,” I say to the friend, pointing at the boy on the snow. “If he vomits, has trouble taking a breath, repeats himself, passes out, forgets his name,” I exhale all at once; “take him to the hospital!” The friend nods and the boy stands. They ride away, disappearing into the swirl of fat flakes.

At 31, I became a ski patroller at a busy resort 150 miles east of downtown Los Angeles. It was a profession I had wanted to do ever since I was a kid in upstate New York. Every Thursday night from January to March busloads of teenagers from across the region took over Labrador Mountain and ski patrol was always ready to save us from ourselves.

My friends and I liked to ski a treed glade that separated the designated night runs. Populated and thick with willow and eastern white pine, only a narrow trail penetrated the shadows. It was off-limits and we thought that was cool.

In the middle of the forest was a small clearing with three knee-high tree stumps. It was our spot and, in the quiet of the night, we inhaled the cold. We also passed a joint and sipped from a flask filled with Southern Comfort stolen from our parents’ liquor cabinets. We were three adolescents caught up in the reckless theater of our young lives.

But our absence from the safety of the slopes was noticed; at the edge of the forest, a college-aged guy wearing a red vest with a white cross waited. Warm from the liquor and more than a little stoned, we’d come to a jumbled stop in front of him. He’d ask our names, our school, and what we were doing in the woods. “I’m showing my friends the trail I ski with my dad,” I’d say. It worked every time. He would admonish us to “stay out of the trees” and let us go. We were his usual Thursday night offenders.

Before becoming a ski patroller, I signed up for the required first aid course. Twenty of us sat through five months of bi-weekly training in lifesaving techniques. We studied our A, B, Cs–airway, breathing, circulation–and D and Es. Deformity? Expose. We became skilled at recognizing injuries based on their mechanism, or cause. Each had a lock-step first aid protocol. For a skier hitting a tree, the mechanism was sudden deceleration. While the range of injuries was vast, the life-saving action was simple: backboard and transport.

The class scared me. I remembered the night I drank too much during a Thursday night foray in the forest with my friends. I hit a tree. Hard. The impact gave me a lump on my temple the size of a quarter and the left side of my chest felt spongy. I didn’t sleep that night and my head and side pounded for days. I had come close to sustaining permanent injury, but a future mired in my youth was never my intention.

My early negligence compelled the adult me to help others who found themselves in situations they never expected. Like the college student whose epic fall left his pupils like two mismatched drops of motor oil. His offense: skiing beyond his ability. Or the time I assisted a colleague after she located a man who had hit a tree. As we worked on him, the smell of weed hung in the cold air and empty beer bottles rolled from his pockets. His penance: never walking again. And the time I responded to a child falling from a lift. As I approached the tiny heap of girl, I repeated to myself, “no, please, not her, she’s so little, please God, no.”

Waiting to catch last chair, I recognize the friend from my morning. He returned to thank me. The boy on the snow had collapsed. “You were right,” the friend said. “I took him to the emergency room; he’s in surgery, ruptured spleen.” I hug him and it’s in that moment I’m grateful the recklessness of my youth left a lasting mark.